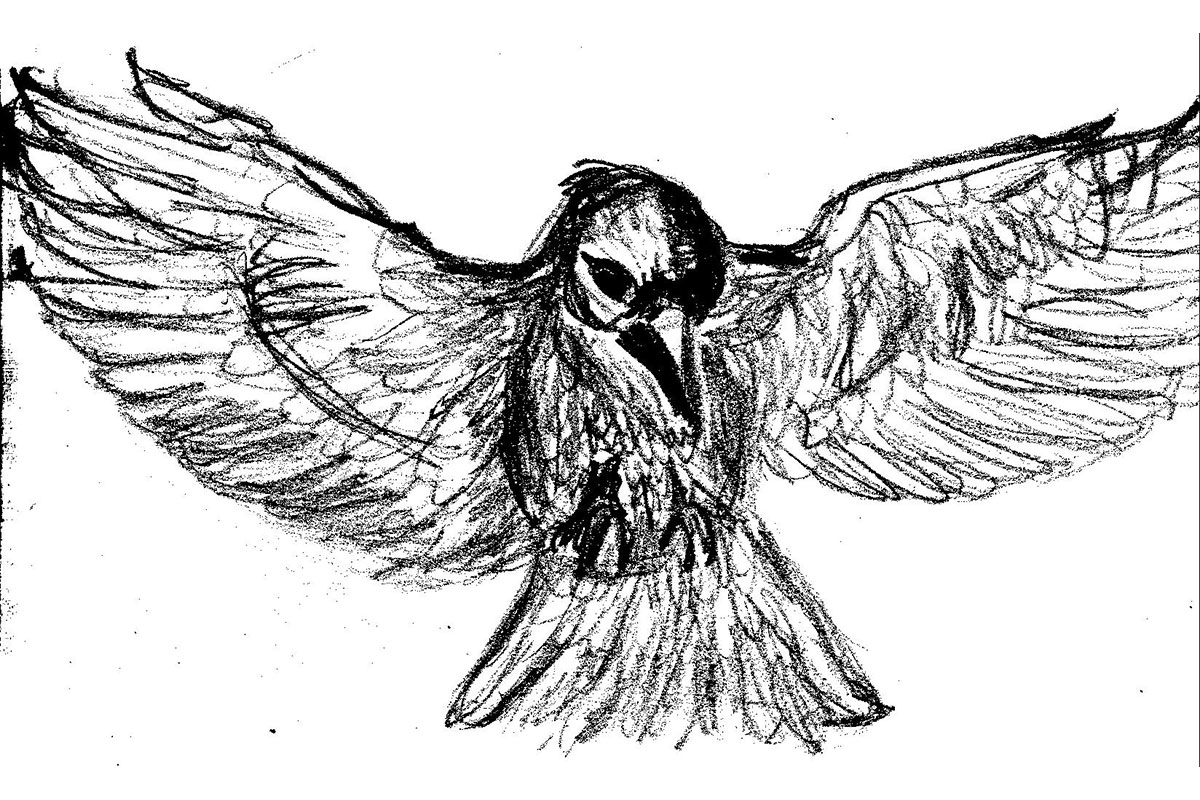 She first sees the bird as shadow against shimmer, black against shifting colour, stretching its wings. It makes her think of Liszt in his topcoat and tails, arms raised before the cymbal crash.

It watches her, and in the pinprick light of its avian eye she recognizes transition. She saw the same in Frédéric’s when they said goodbye—“and take that disgusting cigar with you, Aurore,” he had said, to hide emotion—as the skeletal hand that had entranced the world reached feebly for the water glass, or possibly the grave. The cold Paris night was kissed with colour as she stepped outside, a new story dancing at the edges of her mind.

“The Aurora Borealis,” she says now, addressing the bird. “My namesake. Am I dead, then?”

“You might be.” Raven, on his perch, cocks his head. “But then, you were never one to hold with convention.”

“As no writer should. Or woman, for that matter.”

Raven descends, glides along beside her.

“If I am dead, then where are the others? Is Alfred here? Frédéric?” She looks chagrined. “I was too angry to attend Frédéric’s funeral. The great Chopin couldn’t pull a fast one on me.” But she knows it doesn’t matter, not here. She pats the pockets of her waistcoat. “I need a smoke.”

Raven floats along on extended wings. She can hear the whistle, the crackle and snap of the light—or perhaps the sound lives in the pinfeathers of the great bird.

“Speak to me!” she demands. “Are you my escort? Tell me: what of this light that surrounds us? More beautiful than Chopin or Liszt. More entrancing than Balzac or Baudelaire—” she pauses. “That bastard.”

“He wasn’t the only one with opinions.”

“I don’t care. I have never cared. Say, are the lights brighter?”

The whistling intensifies. “I prefer George.”

“Only the Trickster may straddle both worlds,” croaks Raven. “So legend says. But maybe you qualify, Aurore-George. What will you do? Stay with me, or kick walrus skulls around with the others?”

“They all love a good ball game. Even your Frédéric.”

George thinks about this. “I can’t see it,” she says. “He was always so squeamish.”

The light swirls around them, emerald and crimson. The sound is deafening. Ahead, figures dance. George squints against the brightness, and yet she’s drawn to it.

The bird rolls its eyes. “Everyone wants to be a legend.”

In Paris, Gustave Flaubert takes up a raven’s quill and writes to Ivan Turgenev on the death of George Sand. He had wept like a calf, he writes, at the sight of her coffin. He imagines her in heaven, watching—headstrong, passionate—as his words form on the page. What would please her?

“Her funeral was like a chapter in one of her books,” he writes, and as he does the sky erupts in light.

Anne DeGrace is the author of four traditionally-published novels and author/editor of several self-published regional books. When not working at the library, she is probably walking her dogs, and (occasionally) writing. Short fiction is her first love.