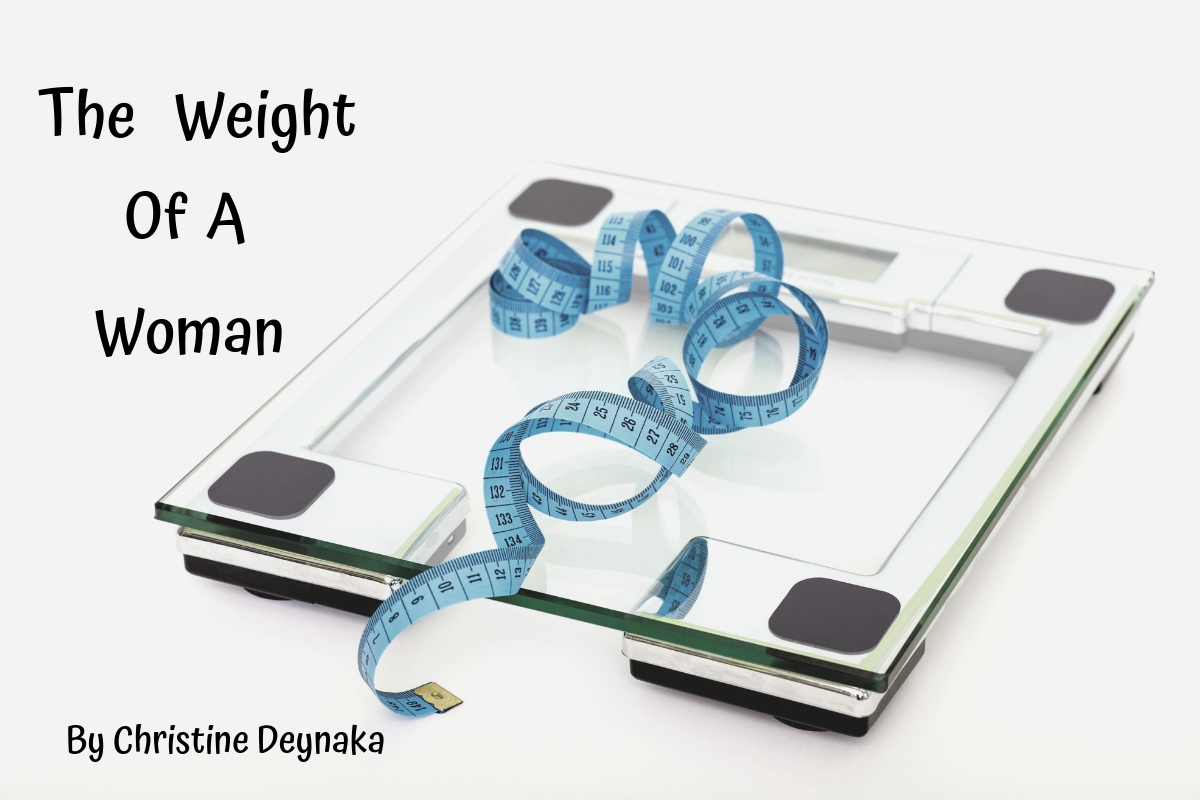 I was born in 1963, snuggled between the voluptuousness of Marilyn Monroe and the androgyny of Twiggy.  I didn’t know I had an insidious “weight genie” with me, one whose judgment was based on my every pound.  She was proud I had started life tiny. The less of me, the better.  She did not care I had arrived before my due date, that my start was unhealthy.  With her help, I would quickly find my place among the army of women who were burning their bras while standing on a bathroom scale.

My family moved into a new house.  Along with the luxury of a dishwasher, was an innocuous bathroom scale. My weight genie turned that scale tyrannical, forcing my mother, sisters, and I to stand stiffly at attention. At least once a day, but often more, waiting for confirmation that we were either rightly or wrongly sized.   My dad did not seem spellbound in the same way, checking his weight every so often just to remind himself that he did not need to care.  As puberty crept upon me with its added pounds, I started eating less at breakfast only to surrender to ravenous hunger by eating my lunch on the bus before getting to school.  I became a woman amongst the monthly cycle of menses and the daily cycle of hunger and satiety.

I decided to surprise my boyfriend.  Our love was rapturous and volatile.  Although he was sleeping, I had a key to his basement suite.  I quietly entered, turning the corner to his bedroom, only to be stopped cold by the glamourous stare of Cheryl Tiegs above my boyfriend’s bed.  I was enraged by her casual poster pose with her thumb hooked into her barely-there pink bikini bottom.  Her provocative body challenged me to compare myself to the perfect hybrid of Marilyn and Twiggy.  Unlike the fake plastic of Barbie, I knew Cheryl was all too real and must be eliminated from my boyfriend’s dreams.   In a well-orchestrated ambush, I leapt across the room and yanked Cheryl off the wall, violently tearing her into little pieces hoping to erase my inadequacy.

I moved away from home to go to University and finally cut the umbilical cord with the scale.  It was a master I could never please. My fleeting moments of satisfaction did not justify our continued relationship.  I was taking control of my life. Sadly, throwing out the scale did not mean throwing away my judgment.  Although I didn’t know my daily weight, mirrors become my substitute obsession. Even more dangerous, new friends become my point of reference.  This was the 1980s, anorexia and bulimia were the new fashion statements on campus.

I was living with one of my girlfriends, her after supper vomiting became a ritualized point of tension between us.  I stood outside the locked bathroom door listening to her wretch and begging her to stop.  Her ability to use her fingers as a weapon against herself showed a pseudo sense of bravery I was thankfully incapable of, despite having tried a few times.  My other girlfriend was a grown woman and the size of an eleven-year-old, except for her discreet but noticeable breasts.  She was desired by men and women alike.  I knew this goddess of womanhood bore her own cross, surviving on cigarettes, carrots and apple cider vinegar.  I was jealous of her, even with her orange tinge glow.

It was during those years I hit the pinnacle of my own yo-yo dieting.  Garnering my willpower to live on black coffee and salad only to crash into packing on pounds of ice-cream sandwiches and vodka paralyzers.

I met a man.  My weight stabilized. Not necessarily because I was stable but because I was active and eating right and most importantly, believed I must maintain a certain weight to be loved.

I was having babies. For some women, this is a time to escape the chains of the weight genie overlord. Not me. I carefully counted calories over three pregnancies.  In fact, I secretly relished the astonishment of people when I told them I was four months pregnant with my second child and they hadn’t noticed.  Unlike the first and third, this baby left my body before she was born. It had nothing to do with my weight but the guilt lingered. I was more worried about how much exercise I was getting than the baby who was not forming inside of me.

I was separating from my common-law partner.  The burden of being alone with my young son and daughter, a full-time job, and a move to a different town plummeted my weight to the lowest it had been in a decade.  I did not have time to care. As the sadness and stress of single parenting wore me down, the weight of my life attached to my body.  I went through a daily gin & tonic phase before I brushed away the fog around me and found myself again.  There was a bit more of me than usual.

Just when I started to feel healthy again, menopause jolted me into hot flashes and rolls of skin above my jeans which appeared regardless of how skinny the fit.  As my body slowly softened and sagged, my weight genie introduced me to her sister – the age genie.   Together, they have taunted my naïve hope of someday relaxing into shapeless clothes, wisdom and wrinkles. Instead, they have presented me with a litany of self-loathing that will add weight to my grave and survive through multiple reincarnations of my womanly self.  Hopefully I do not need to be tiny to make those journeys.