Her Call by Lazarus Reise 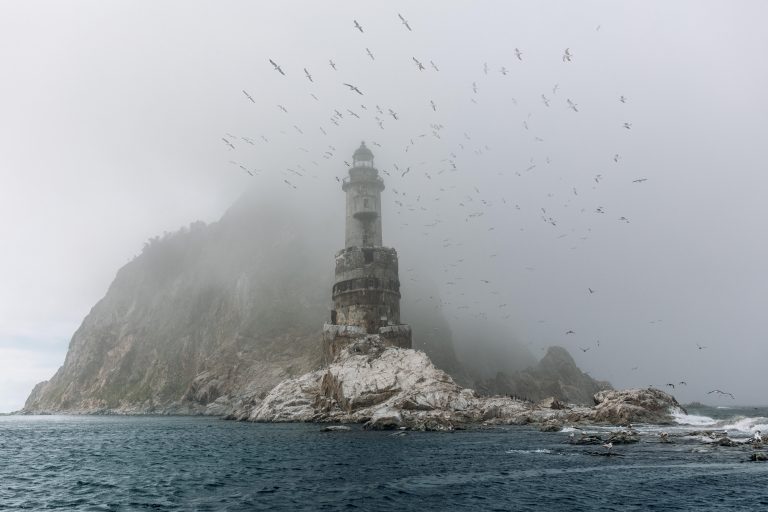 The monolith in the sky spun tauntingly, shedding bright white light across the misty horizon, the windswept bay, and the briny sea. It was just us two; the sailor and myself. For ten dollars a day, the isolation was worth it, and the quiet was nice. Our duties were to look after the lighthouse’s upkeep and maintenance. There was never an easy day, but it kept my head busy. The sailor was an old and haggard man around the age of sixty whose hair was snow white and sparse, all except for his bushy moustache. He fit right in with the craggy island. No longer than one mile across the isle was. The lighthouse perched precariously at the peak of the west-facing cliff, warning and protecting other sea-faring vessels. As the days continued, the old man and I slowly began to get along less and less. His manners were atrocious; he constantly nit-picked and was lazy to no end. Shortly after our most bitter disagreement, the lighthouse laws were created.

Washed in the orange light of the cabin’s single lantern, we sat, paper and ink between us, quill in hand, and decided upon rules that would come to govern our next months here. He began by writing down the basics, our upkeep tasks: washing the lighthouse windows every month, feeding the coil engine, emptying the chamber pots, so on and so forth.  He scratched his beard as we sat in silence, contemplating how to put our annoyance into words.  He looked into my eyes for a long moment, seeming to gaze past me for a second before he wrote something down on the page:

“You may not enter my lighthouse,” the messy scrawl read.

I looked at the ink scrawled across the page and debated whether or not this battle was worth the fight with him. Instead, I sighed and muttered to myself, “Stubborn, jealous old man.”

He was so goddamn protective of that piercing, righteous light, repelling and guiding lost ships. “My light, not yours.” he would say over and over, as much to me as to himself.

So for an hour or more, we sat creating our laws, arguing, debating, compromising until finally, a full sheet was filled in dark black ink thick as oil and as binding as warm glue.

Always as I worked on the misty island, the light spun. It called to me. From time to time, I would see the old sailor backlit against the harsh white light. Every. Single. Time. My blood would boil. I remember thinking, “that old sea dog doesn’t deserve it. Doesn’t deserve her.” I would never have realized it, but she had sunk her teeth into me deep, deeper than I would ever realize.

When the lighthouse called, I always struggled to resist, but last night was impossible. I needed to see her up close. Every time I blinked, I saw her light behind my eyelids, ghostly pale and hauntingly beautiful. She called, and I answered.

Sneaking the keys away from the old man was not hard. The stupid old bastard always slept like a rock. I climbed the long spiral staircase leading me to my quarry. My mind wandered for a moment as I thought back to the piece of paper lying on the table of our cabin. The laws we had created. I finally realized they were nothing but a restraint from me getting to her, to that lovely luminance forever shining across the waves. Slowly, methodically, I climbed the stairs, determined to reach her. I did not notice him climb the stairs behind me. I did not notice him standing behind me either, drool dripping from his maw in rage, watching. The keys slid into place and clicked satisfyingly. I had finally made it to the top. I would finally bask in her cleansing light. Her promise of salvation whispered and echoed around my mind. As I pushed the door open, his hand clamped onto the nape of my neck.

Straining against his grip, his hot breath whispered into my ear.  “She is mine, boy. Not yours. My veins ran cold as ice. I could feel every finger dig into me tight enough to draw blood.

His grip flexed and ripped at my skin as he threw back his hand, dragging me backwards and over the railing at the top of the lighthouse. I was so close to her. And as I plummeted, wind whistling, arms flailing, I screamed, for what else is one to do when torn away from that they love most? Even as I fell and spun, the pull never stopped. When it was almost over, when I had almost reached the ground, an idea comforted me. I thought, “I will be part of her. My blood will seep into the cracks, becoming one with her foundation. The cement and I will mix, and I will have won. No longer will she be the sailor’s. She will be mine.

The screech of the air and myself intertwined as I careened toward the ground, twisting and wrenching. She was the last thought that ran through my mind before I hit the ground and forever came to rest. Finally, I was satiated, and victorious my conviction never wavered, even as my last breath did.

Lazarus Reise is a student at Selkirk college. They are taking the psychology U.A.S course. He enjoys story-telling, conversations, and reading. Often they can be seen in their patch jacket roaming the campus.