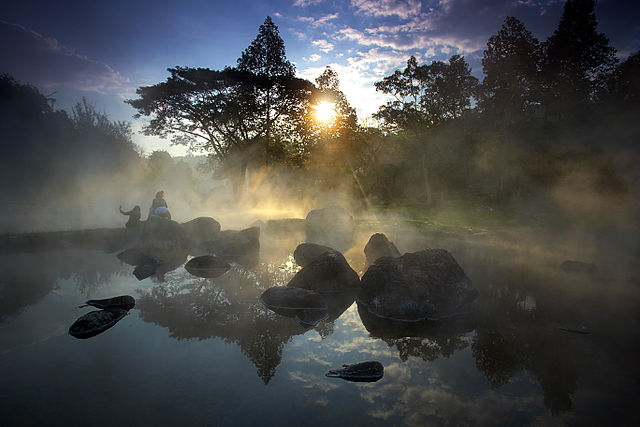 She sat on the cool rail, looking out into the woods on the far side of the tracks. Waiting. It was still early enough that a thick fog clung to everything, as it did every morning in the spring. A breeze shifted the air around her, and she could feel the cool dampness against her legs. When the sun finally rose from behind the mountain, the fog would rake up through the trees, catch in the pines and tear, looking … like ghosts, she thought and shivered. Then she laughed, and the birds that had been fluttering and waking in the trees were still. A heavy silence shrouded the woods.

The train tracks ran straight out on either side of her. To the south, they disappeared into the fog and curved around the hill. In summers, most town kids would use the tracks as a shortcut to the lake—it cut half an hour off of your walking time if you couldn’t get your parents to give you a ride. The other direction crossed the bridge into town. Early morning sun was already glinting off the windows of the rail yard warehouse and reflecting back at her.

She shaded her eyes. Soon the fog would burn off completely, and her chance would be gone for another day. She wasn’t afraid of a train coming unexpectedly; she hadn’t been afraid since the accident. When James did appear, her heart leaped—she didn’t know it could still do that.

He walked up from the edge of the woods, closing the distance easily with his long stride. He wore a hat and a light jacket that morning. He looked older, taller. She felt suddenly like she hadn’t seen him in years. Had it been that long?

She sat still, waiting for him. She didn’t call out; she had tried that before and it either scared him or he didn’t hear her anyway. This time she just watched as he approached.

He was older. She could see his face better now and saw the shade of stubble. He stood on the edge of the tracks for a moment, looking around. She watched the fog loosen around him, eddies swirling away. He looked right at her but didn’t see her as he sat down on the rail across from her.

“Hi Stell,” he said, looking up toward the sky. He looked tired but smiled when he said her name.

She wanted to reach out and touch him.

“I love you too,” she whispered, watching his face.

“Remember when I used to throw sticks at you and Sarah on the walk home? Just trying to get your attention … any attention. They were just small sticks … I was a bad kid …”

Stella laughed again but quickly cupped her hands over her mouth. James looked around quickly as that breeze swirled the fog away from his face. He checked his watch and peered down the tracks.

“Why did you have to take the shortcut that night?”

“Doesn’t matter now, does it?” he said angrily and scuffed his feet in the gravel.

She didn’t know what to say so they sat silently for a moment.

“I’ve been missing you a lot lately,” he said quietly, wringing his hat in his hands, “but … I … I’ve decided to go to college.”

Stella’s breath caught in her chest. If he went away to school, she’d never see him again.

She felt suddenly weightless, floating, her mind and heart spread wide open. He looked up, he looked right at her, and for one moment, saw her. She smiled at him, their eyes meeting one last time, and he could feel the warmth of her fingers brushing the back of his hand.

And then he was left alone on the tracks.

Leannah’s love of stories started at an early age when her parents and Grannie used to read to her before bed. She has been writing stories and poetry in her head ever since. Leannah has worked for years in healthcare, first as a massage therapist then as a care aide and a nurse but always, always cycling back to writing. Leannah grew up in the Kootenays before running away to Ontario for post-secondary schooling. She is back in the mountains she loves and likes to break up her time writing by catering to her two spoiled cats and falling in love with trees.

PrevPreviousSmells Like Team Spirit: A Song about housing and homelessness by H. Robert Mack.
NextFishing By Lynda RochaNext