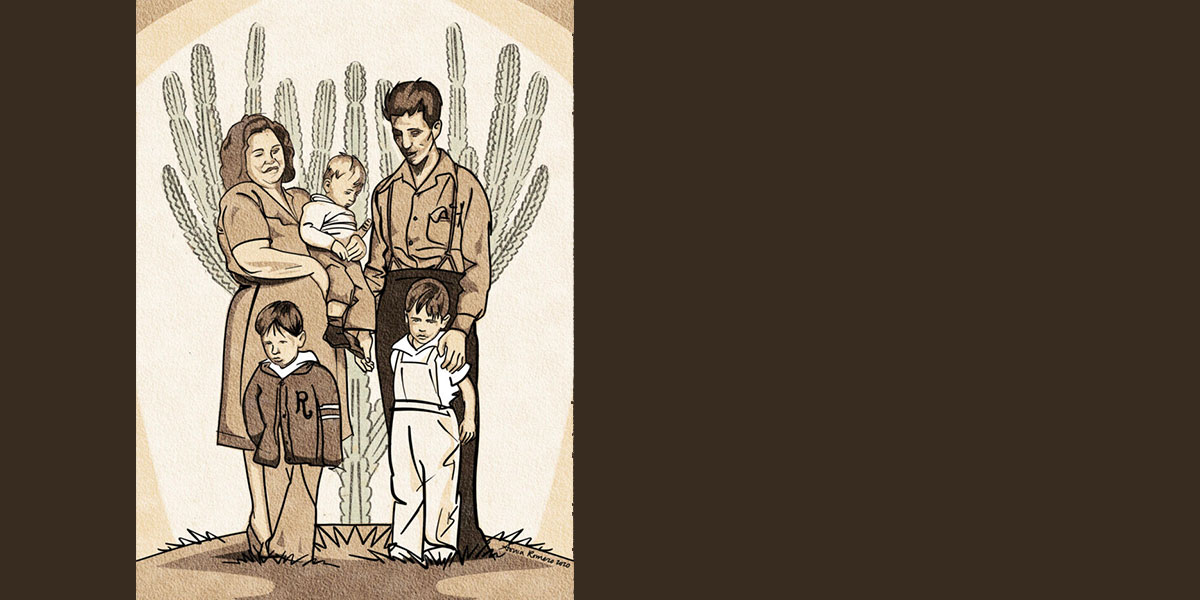 It happens
Every
Night
Single
Telemarketing Juliets
Calling from their ivy-covered balconies
Calling for their star-crossed lovers
Calling,
“Hello”
“Is Mr. Romeo in?”
I’m sorry
Romeo went to go grab a burrito
Mercutio to cruise Whittier Boulevard
And Shakespeare to take some ethnic studies classes
In other words…
Romeo isn’t in!
My name is Romero!
I am not Italian
Spanish blood
Coursing through these veins
Though my parents are not from Spain
And despite the Southern Californian accent
That allows words like
“Dude”
“Sweet”
And “sick”
To tumble gracefully from these lips
I’m not a white guy!
I’m a Mexican!
My name is Romero!
Romero like Archbishop Oscar Romero
Zombie filmmaker George A. Romero
Actor
Cesar Romero
Yes!
Before
Jack Nicholson
Before
Heath Ledger
A brown man
Played the Joker
They dressed him up in green wig
Purple suit
And white face
Though he would not shave
His trademark suave
And sexy
Latin mustache
No!
He was a Romero!
I am a Romero!
My parents had dark skin
And dark eyes
When I was seven
My brother lied
Told me my father
Was the mailman
“How could you be the son of our parents
With your blue eyes
And white skin?”
Well, brother
Like Jerry Springer or Maury
The DNA results are in!
I am a Romero!
And I know what some of you are thinking
That I’m just another white guy
Trying to prove he’s a Latino
Or just another Mexican
Chest-beating
Beating his chest
Beating whatever reputation he has left
Trying to convince you
That his family
His country
His nationality
Are better
Than you!
Well
I know as well as anyone
That we are all the children of Africa
Roots of no single family tree
But of a flourishing forest
That grows majestically
Towards a magnificent destiny
Shining
Radiating beauty
Just please
Close your eyes
And you can see it…
But the name of this poem isn’t,
“We are the world”
“We are the children”
No!
The name of this poem
Is “My Name Is Romero!”
Because if you’re not proud of who you are
Then what’re you gonna be proud of?
And if you don’t know where you come from
How’re you supposed to know where you’re going?
And I know one thing:
That the name of my father
And my father’s father
And his father’s father
Before him
Was Romero.

David A. Romero is a Mexican-American spoken word artist from
Diamond Bar, CA. Romero has appeared at over 75 colleges and univer-
sities in over 30 different states in the USA. Romero was the second poet
to be featured on All Def Digital. Romero has opened for Latin Grammy
winning bands Ozomatli and La Santa Cecilia. Romero’s work has been
published alongside poets laureate Luis J. Rodriguez, Jack Hirschman,
Alejandro Murguia, and Lawrence Ferlinghetti. Romero has won the
Uptown Slam at the historic Green Mill in Chicago; the birthplace of
slam poetry. Romero has appeared in-studio numerous times on mul-
tiple programs on KPFK 90.7 FM Los Angeles. Romero’s poetry deals with family, identity, social justice issues, and Latinx culture.

Romero is a graduate of the University of Southern California, a dou-
ble major in Film and Philosophy. Romero is the former host of Between
the Bars Open Mic at the dba256 Gallery Wine Bar in Pomona, CA.
Visit his website, www.davidaromero.com for more.

Sonia Romero is a Los Angeles artist known for her paper-cut and
printmaking aesthetics which she incorporates into both her fine art and
public art commissions. Born in 1980, she grew up in an artistic house-
hold in Echo Park before formally studying at the Rhode Island School
of Design. After returning to California, she began working as a public
artist, and was the artist in residence at Avenue 50 Studio in Northeast
Los Angeles from 2007-2014.

Calling upon her own experiences and perspectives as a multiracial
person, Romero creates work that reflects the cultural diversity found
in the communities of Los Angeles. She explores themes relating to the
universal connectedness within humanity as well as its relationship to the
environment. Her signature style, a dynamic combination of printmak-
ing, paper-cutting, painting, and sculpture, includes fine art pieces that
have been showcased in many galleries and acquired into the collections
of prominent institutions such as the Los Angeles County Museum of
Art and the Smithsonian. Her distinctive paper-cut shapes and patterns
can be found in steel, tile, or paint in one of her many large-scale perma-
nent installations in notable locations such as Little Tokyo, the Mariachi
Plaza and MacArthur Park Metro Stations and the Artesia County Public
Library. soniaromero.net