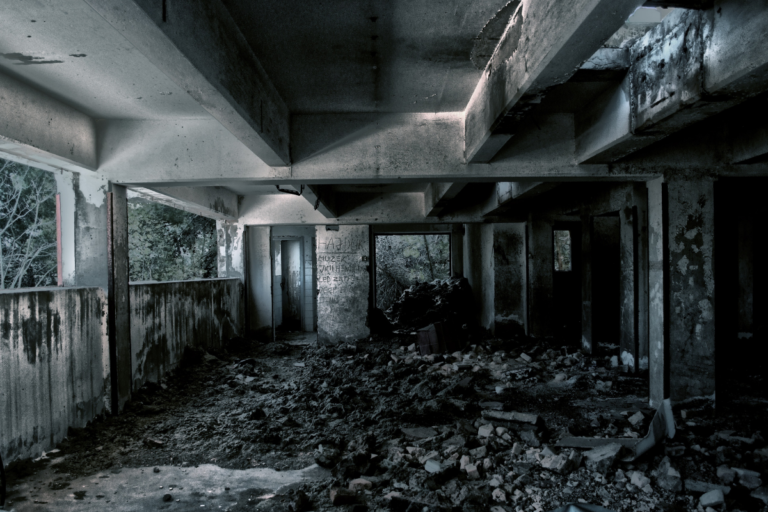 A young woman stood over a freshly painted yellow crib, carefully adjusting some stuffed toys. She gently placed a smiling elephant next to a scarf-wearing fox, and then stood back, admiring the effect. She gazed at the fluffy creatures for a moment, entranced by their blankly cheerful expressions and cartoonishly bright colours, such a stark contrast to much of what she and her husband had been forced to witness in the last six months or so. Already, it was hard to imagine the world in which these silly toys had been manufactured, a life where cuddly toys like these ones would have been loving gifts from friends and family members, anticipating the arrival of a little life. Running her fingers lightly over the ever-growing evidence of her advancing pregnancy, the young woman wondered how many toys similar to these had been clutched close to feverish little bodies, how many smiling elephants were dampened first with fever-sweat, then splatters of blood, coughed up. How many scarf-wearing foxes had witnessed a child’s final, rasping breath. She looked at the false animals in front of her and for one wild moment,  imagined their lifeless glass eyes narrowing in disdain at her. “What do you think you’re doing”,  they jeered at her silently;  “How do you think this ends?”.

Giving her head a firm shake, the young woman gave the cuddly arrangement another once-over before turning away from the crib. It wouldn’t do to let herself get carried away with those kinds of thoughts. She glanced over at her husband, who stood by the nursery window, peering out. He flicked the blue curtains open with one practised hand, the other hand wrapped firmly around the stock of a heavy shotgun. She walked over to him, and stood behind him, running her hand over one of the curtains, wondering if she should have sewn them out of the yellow fabric he had managed to scavenge instead. Yellow was more cheerful, but blue was supposed to evoke feelings of calm. She also vaguely remembered hearing that the colour blue made people feel sleepier. It would be good for the baby, then. Good sleep pretty much assured good health. Rubbing a piece of tatty blue fabric between her fingers, the young woman thought back to the day when her husband had come back from a scavenging trip with all the tools she needed to sew these curtains. She had been so angry with him that morning, because he had been gone for almost an hour longer than they had discussed and she had begun to fear the worst. Had he run into other survivors, hostile men and women who had been driven mad by terror and isolation? Had he fallen to his death  through the flood-dampened roof of some abandoned warehouse, breaking his neck? Or had he somehow contracted the sickness while outdoors? When there was still people, when they had still thought there might be a fix, the illness started to run its course faster and faster as if mocking their hope. Toward the end, there was less than a day between when people started showing symptoms and when they fell dead. Being left alone with those dark thoughts for nearly an hour had almost driven her mad, so she had managed her mounting terror by turning it into anger- anger that evaporated as soon as he walked through the door. He was sweat-drenched and covered in dirt and dust, and he had smiled at her so triumphantly, his white teeth startling in his dirt blackened face. She had looked down and saw the bolts of fabric tucked underneath his arm, and listened in numb awe as he explained to her that he’d brought her different colours to choose from, unsure of what she’d like.

And now he peered through the lovely blue curtains he risked his life to make possible for her, and experienced a dizzying wave of emotion. They had found out about her pregnancy right around the time reports of a mysterious and fatal virus had started dominating the news. At first it was localized, and newscasters assured the public that quarantine measures were being taken to ensure that the virus would not spread, and these measures were guaranteed effective. And they weren’t effective, and the virus began to spread. Rapidly. And so any joy they may have otherwise felt about the pregnancy -which was so wanted-was lost in the absolute certainty that they would soon be dead. They were still unsure of why they were not, but had long given up wondering in favour of building some semblance of a life for their child. The young woman saw the fabric her husband had scavenged for her as a irrefutable sign that he was still with her, was still willing to play at normalcy in some small way for the sake of their baby, even if it was insane. She was grateful.

She wrapped her arms around his waist and hugged him tightly, the small bump under her sweater pressed against his back. She stood on her tiptoes and looked over his shoulder into the street below. They were two stories up, but they had a good view of both ends of the street if they only craned their heads. There was nothing new out there, the streets just as ruined as they had been for months, as empty as they had been for days. Shattered glass littered the sidewalks, gleaming in the weak mid-morning sun. Several suitcases lay cracked open, spilling clothes into the streets, dropped and abandoned by those who had thought they could escape. And then there were the bodies. Not too many, only those of the poor souls who had wandered into the streets after the trucks stopped coming through. The armoured trucks that were driven by stone faced men and women in Hazmat suits, going from door to door to collect the dead from any house with something red tied around its front door handle. After the trucks stopped coming, some people had ventured outside, wandering up and down the streets as if they still thought someone would come and rescue them. Only some of those who wandered had been sick, at first.

The first day she had gathered the courage to look outside, after they thought the worst of it had to be over, she had looked out the same window they stood at now, only then there had been no curtains. Her husband was out on his very first scavenging trip, and she stood alone at the window. A man had wandered into her sightline, weaving like a drunk. He stopped, so suddenly, like he could sense her gaze upon him and looked right up at her. He stumbled closer to the building, until he was standing almost directly underneath the second story window. She saw then that he was really more of a boy than a man, with only the faintest stubble covered his pallid cheeks. His bloodshot eyes met hers, and she recognized that he was in the final stage of the illness. There was a bloody foam collecting at the corners of his mouth, and his nostrils were ringed with dried blood as well. She had no idea how he was able to stand, let alone walk. He lifted his hand, as though to greet her, and she found she could not break eye contact with him. There had been the strangest expression in his eyes; at the time she thought it was disdain, but now she thought it was almost like he was resigned. How do you think this ends?.

He took a step toward the house, his eyes glassy with pain and never leaving hers. Then there was the deafening crack of a shotgun blast, and half of his head disappeared in a spray of blood and gray matter. His entire body was thrown backward by the force of the blast, landing with his limbs splayed like a doll dropped carelessly on the ground. What was left of his head was turned away from her; he wasn’t looking at her anymore. She looked down the road and saw her husband, a shirt tied tightly around his nose and mouth, the shotgun he’d managed to loot held at his side in a trembling hand. He gazed back at her, his eyes wide and almost animal. Even from where she stood at the window, she could see how rapidly his chest was rising and falling. She didn’t think he had ever fired a gun before. Before, he had been a writer. Later that evening, as she rubbed the shoulder that was sore from the shotgun’s unexpected kickback, he would show her calluses that were starting to form along his palms. She had laughed then, as he teased her by rubbing his newly-rough hands over her still soft face. She had laughed even though there had been a wildness in his eyes she hadn’t seen before, a desperation that help him forget what he had done, what she had seen him do. She shuddered a little, remembering it, and pulled away from the window. Her husband looked back at her, and she smiled at him reassuringly and moved back toward the crib that stood waiting for their baby. She rubbed both hands over her swollen belly, hoping to feel a kick.