Let’s Talk: Recovering from Feelings of Helplessness in the Time of Climate Crisis By Deb Wandler 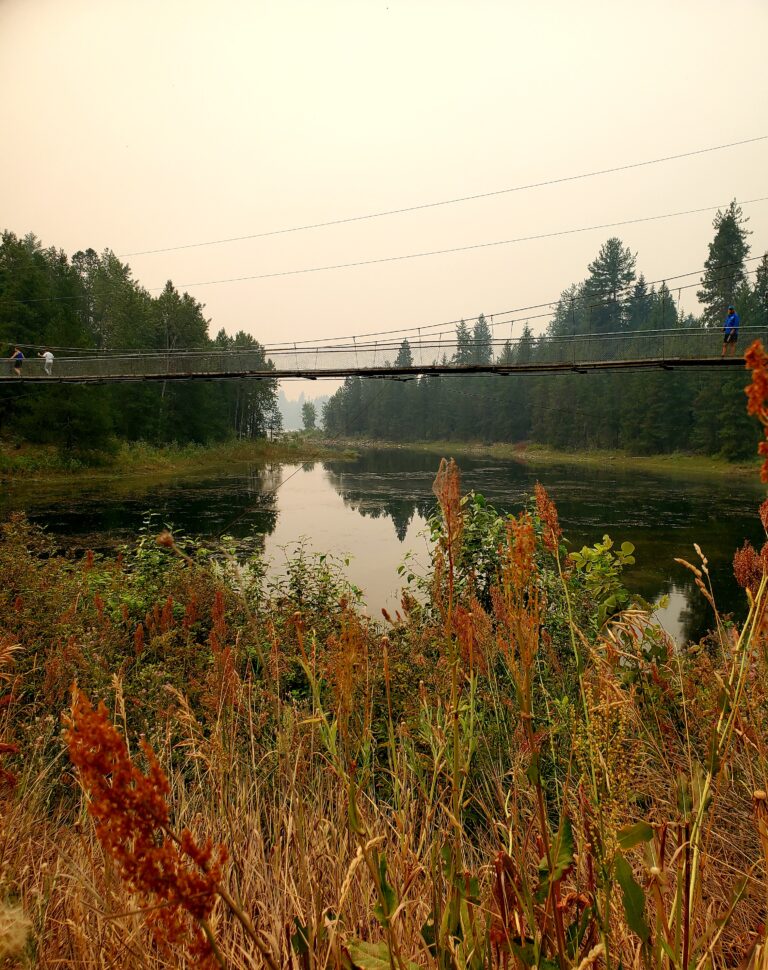 “If we didn’t do anything, my heart probably would have shattered in 2 billion pieces.”

Videos of flooding and mudslides caused by the first of the atmospheric rivers to hit BC last November were horrifying and the damage left behind devastating. Numerous sections of major highways gouged away by raging flood waters; bridges hanging in mid-air with nowhere to land; cars trapped in between mudslides; the trans-Canada highway through Abbotsford underwater; a lake where there was once fertile farmland; and no way in or out of Vancouver, a major port city for the province. I had travelled those highways many times.  The videos I watched from the safety of my West Kootenay home assaulted my sense of safety in the world, leaving me feeling immobilized.

Atmospheric rivers happen all the time, but the one to hit the coast of BC and Fraser Valley dropped a near-record of a month’s worth of rain over a 24-hour period.  The devastation was shocking. Numerous travellers were trapped between massive mudslides and washouts, and lives were lost. Others were stranded in communities, unable to make their way back to or out of the lower mainland. In Hope and as far away as Surrey, people banded together to provide hot meals to those stuck in their vehicles. Helicopters rescued people; vehicles were left behind. Many folks in the Nicola Valley and on the Sumas Prairie lost homes, livestock and their livelihoods. It could take months, maybe years to repair highways and for people to live again in those places affected by flooding.

This, after the summer of extreme temperatures and wildfires. Five months earlier, one of those fires burned on the side of the mountain on the edge of Castlegar, before jumping the highway to the tops of backyard trees only three blocks north of my street. Thankfully the local fire department was able to put those rogue flames out, while water bombers released large swaths of red fire retardant and helicopters dropped bladders of water on the burning mountainside. Hundreds of people were placed on evacuation alert.  My niece and her husband, visiting from Alberta, decided to leave just in case we too were put on evacuation alert. Before they left, Karen suggested we take photos of the content of the house, garage, and sheds should we need them for insurance purposes. She walked around our home, inside and out, opening closets and cupboards, taking photos of everything. I was left to pack an emergency bag with important documents, medications, essentials for a night or two away from home, and any valuable items we’d be devastated to lose. When my niece came in to see how I was doing, she found me standing in the middle of the living room clutching the photo albums of my children to my chest, wild-eyed.

My husband struggled on his own to hoist hoses on to the roof. Finally, he threw everything to the ground, deciding there was no use. We live in the middle of a forested hillside. If the fire got as far as our house, nothing would be able to stop it from burning the house down. We were very fortunate to live so near a local provincial fire centre base — within three days, the wildfire was 90% contained, and the evacuation alerts were lifted. No structures were lost. We unpacked our emergency evacuation bag, put photo albums back on shelves, and did our best to settle back in.

According to Earth Scientist John J. Clague from Simon Fraser University, “Scientists are generally reluctant to attribute single extreme weather events to climate change, but the exceptional events of recent years are shifting opinion.” These exceptional events are no longer one-offs. Wildfires and smoke-filled skies in and around the West Kootenays this past summer left us locked inside during record high temperatures. One of my classmates recently compared it to living in a smoky furnace. In late July, Trail BC, just 20 minutes south of my home, was recorded as having the worst air quality on the planet with pollution levels 43 times the maximum recommended levels. Nelson and Castlegar were not far behind.  A CBC news story reported that BC had more than 1600 forest fires burning nearly 8,700 square kilometres of land, making 2021 the third worst on record in terms of areas burned. 2017 and 2018 fires made up the other two worst years. Smoke filled summer skies in the Kootenays are becoming more of an expectation than an exception.

A global study carried out by Ipsos in 2020 revealed that 64% of Canadians think in the long term that climate change is as serious as COVID-19. 60% think government must act now to combat climate change; yet many are unwilling to change their own behaviours. Canadians expect the government to act quickly and yet we are unwilling to do anything ourselves. A byline in the study encourages Canadians to “Ask not what your country can do for you, ask what you can do to help the environment!”

I needed to learn more about what I was feeling in the aftermath of what a good friend of mine called this most recent unnatural disaster. Medical News Today described learned helplessness, first named by American psychologist Martin J Seligman in the late 1960’s, as “a state that occurs after a person has experienced a stressful situation repeatedly…and leads to increased feelings of stress and depression.”

We feel overwhelmed. We feel helpless. We lose hope. We do nothing.  Are we unwilling or unable? We think it doesn’t matter to us – it’s happening over there. Except when it isn’t. In British Columbia, we have experienced the climate crisis firsthand. And the experience was terrifying.

Is it possible to find hope when only one third of Canadians are willing to change their behaviour?  How willing am I to change?

Watching a video of a boat-riding cowboy wrangling horses to safety one dread-soaked day in November flicked a switch for me. It showed Henry Chillihitzia and friends herding 29 horses out of freezing cold chest deep water to high ground at a ranch near Merritt. After an attempt to ride their horses out into the fast-moving water failed, they decided to use a small motorboat. It took them four hours to get the horses to move, after standing in the chest deep water all night, but when a mare and her foal finally went for it, the rest followed, swimming through water nearly 2 metres deep at one point. When I heard the cowboys calling and whistling and horses neighing and watched as they rose out of the water onto higher ground, a part of me rose with them. I cried. Chillihitzia was later quoted as saying “if we didn’t do anything, my heart probably would have shattered in 2 billion pieces.” The next day his daughter reported on Facebook that the horses were doing well after being fed and housed in a warm barn over night.

I also discovered climate scientist Katharine Hayhoe, and her book Saving us: A climate scientist’s case for hope and healing in a divided world (2021), through 30 Days of Climate Action. Hayhoe says the biggest problem we have is not the people who willfully decide to reject 200 years of basic science. The bigger problem is the number of people who say, ‘it’s real’ but they don’t think it matters to them.

So, what does she suggest we do? We need to talk about it, and how we talk about it matters. While only 7% of the population are climate deniers, 93% fall into the following: alarmed, concerned, cautious, disengaged, and doubtful. To start, Hayhoe instructs us to never begin by rattling off statistics or lecturing.  She invites us to start from the heart. Begin a conversation with something you agree on and bring the person on board by acknowledging their fears rather than judging them. Ask questions. Share how climate change threatens what you care about. Start with someone you know who shares your values.

I went for a walk recently with a friend. We have been walking together every Wednesday since April 2020, when physical isolation created by Covid-19 threatened our wellbeing. We have hiked mountain trails, walked paved walkways in community parks, meandered along local beaches, and over the last two years we have talked through many of the issues facing us during this pandemic. Yesterday, we talked about climate change. I told her about this essay I was writing and sent her the link to Hayhoe’s TED talk.  She texted after dinner to say Excellent TED talk!! I know she will share it with others.  I plan to, and I will talk with my adult children and eventually my grandchildren, my siblings, my extended family, my friends. I will write about my feelings and understanding of the climate crisis and share my writings with others.

I begin by taking this small action because I know that if I go through another year having done nothing, my heart will shatter in 2 billion pieces. I want to make a difference. I don’t want to fall back into helplessness each time I witness another climate disruption. The more we start talking with each other, the more likely we are to act, to lobby our government to act. In September 2021, Stewart Elgie wrote in the Toronto Star: “The Liberal government has done more in the past six years to tackle climate change than previous governments had done in over 20 years.”  And the byline reads “…on climate change, political actions speak louder than words.” Although there is still so much to be done to mitigate the damage of climate change, I am hopeful to see that the present government is moving Canada in the right direction.

In her TED talk, Hayhoe encourages us to begin now, emphasizing that the only way the world has ever changed anything in the past is when individuals decided it should. They used their voices.

I leave you with a few final words from Hayhoe:

“Hope is that faint, small, bright light at the end of the dark tunnel that we head for with all our might and all our strength. And when we get dragged down, when we get discouraged, when we get anxious and depressed…we take a breath, we fix our eyes on that hope…and then we pick ourselves up, and we keep on going because what is at stake is too valuable to lose. It’s not our planet itself: it will orbit the sun long after we’re gone. What’s at stake is literally us.”

Deb is a retired social work educator having spent the last twenty years of her career teaching at Selkirk College. Some thirty years ago a psychic told her that writing would come more fully into her life in her sixties, and here she is with a daily writing practice that has carried her through these past couple of years and completing her second CWRT Course. When she isn’t writing she volunteers with a program for seniors, walks the local trails, video chats with her children and grandchildren and plans travel adventures with her husband.