“I wish this rain would end.” He said it aloud. The rain accelerated the invasion of night. It came by pulse, thumping like a great and terrible heartbeat... 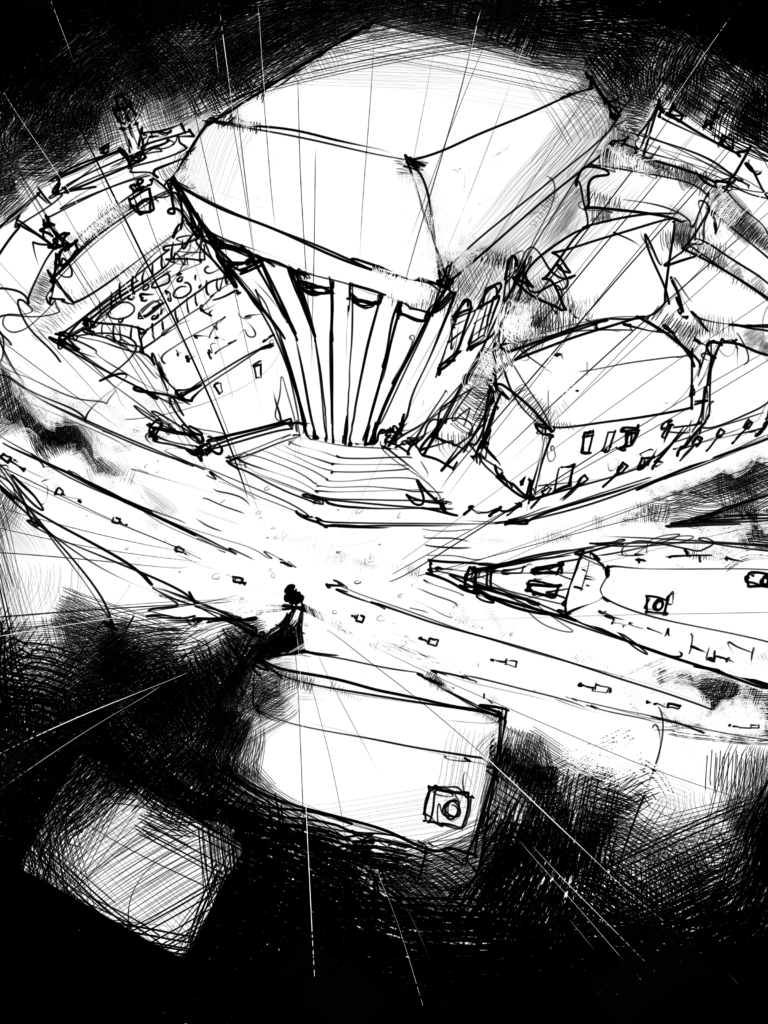 “I wish this rain would end.” He said it aloud. The rain accelerated the invasion of night. It came by pulse, thumping like a great and terrible heartbeat. The wind wicked curtains of water off rooftops and cast them like streamers into the void. Voices could be heard across the street though they were dulled by the overwhelming downward push. A man stood in the rain. He could barely be distinguished from the shadows cast by the light of the galleria before him. Wearing black, or colours that became black when wet. His coat was black. His hat was also black. Shoes, black and glossy reflected into his eyes the light of the building and of passing cars. He pressed a slender briefcase into his chest with both hands. “What a terrible night for rain.”

The man looked up into the sky, his hand on his hat. Rain poured over him, pooling at his feet and permeating his being. The large ornate building poured light and noise out into the night, cascading down its grand stone staircase like the rain. Every so often the murmur of people would swell and fall as crisp glass doors were passed through. “There are a lot of people here today. I didn’t expect this many. So many pairs of eyes to scrutinize me. There must be hundreds of pieces as well, made and published by a hundred artists. Do I have the courage to stand out amongst that crowd? I could blend in, spare myself, but I came here to shine. I came to be recognised, to be obvious. I want everyone here to see my art and know it was I who made it. I want to be known and seen and cared about by all. Is it good enough for them? Is there such a thing at all? The more eyes that see my work, the more my piece will crumble. My faults and missteps will be revealed by the erosion of all those eyes. I can’t imagine this audience liking anything I have to show, it’s so very bland, so dreadfully out of place. All my work is bland, and when it isn’t it’s cheap and trite or strange. It is impossible for me to capture that essence which becomes classic, that depth of feeling which inspires for centuries. My passion is in bland things, in pretty pictures devoid of meaning. I do enjoy creating those, but they are worthless in the eyes of anyone but me. If I hang those here, I’ll be overlooked and forgotten no matter how well it is done. Damn it, why must I care what they think? I cannot allow these faceless people to rule me. To ruin me. I paint for myself. No, I wish I painted for myself, if I did, I would paint well. I paint for them, I paint what I think they want. I am simply incapable of painting as they do and yet I try and am somehow surprised by every failure. I’ll just hang the piece and go. I need not subject myself to any eyes, only my painting. I signed it clearly, they’ll know whose it is.”

The man stood in silence for a moment, barely supporting his own weight in the piercing cold. His sodden clothes clung to his flesh. “What if he is there?” He let the words hang as if awaiting an answer. “No. I can’t think of that, it will ruin me. But I cannot scrub his invisible signature from my own inventions. This painting I have brought, this mongrel of a piece, no doubt its source of inspiration is obvious. So what if he’s there, so what if I must hang my wretch aside his masterpiece. Surely, verily, he or his work cannot be present. It would be impossible. It would be more than a coincidence and I am certainly worthy only of coincidence. But what if he is there, what could I do? Curse him, I can’t be rid of his image! I cannot forget his work! I don’t want to see it! I don’t want to see how he has improved! He is why I suffer. I should have known better, I hate his art, but there is something inescapable about it. I want to be him. I want to create like him, I want beautiful ideas to spring from my mind freely like they do from his. Am I doomed? Am I simply predisposed against creativity by birth? There are those predisposed to a sharp or dull wit. Talent exists, that cannot be argued. So, then it is possible I am without talent. I will inescapably be restrained, ten paces back by no fault of my own. Wait, I can’t think like this, that man, he no doubt has been in practice far longer than I. Assuredly he struggled just as I do. But He is no older than I, so he must have begun and achieved earlier. That cannot be ignored, is that evidence of predisposition? While I played with toy trucks he played with pen and paint! He was drawn to creation while I was instead drawn to consumption. I must force myself to paint. I must labour and strain to print my mind’s eye upon the canvas. I must search long hours for a suitably profound message to base my work upon. He, I can only assume, flicks his brush carelessly, perhaps even while conducting a conversation in another room. Oh yes in his quaint little studio apartment he so humbly creates by an open window and a warm summer breeze with a big smile and not a care in the world. Why? Why do I have to hate what I love? Why do I have to love it if I hate it? Why can’t I be like him? Why can’t I be free?”

“I hate this Rain. I hate steeping in it like my pity. It always starts with some unknown “them” and then him, but in the end it’s me I am so sour for. I know why I do it. Somewhere deep inside I want it to stop. I want the struggle to end, I want to give up. But I’ll never give up not after all I’ve done. I like to paint, it makes me happy, but by my curse I am happy only when I paint wrong. There is no wrong  art but I see it as wrong anyway. Could it be wrong because it is like the rest or is it wrong because it is unlike the rest? Why should I care about  the rest at all? No, I am a liar. I lie to myself, always, and this time it may cost me dearly. It cannot be true that my work is waste, just as it cannot be true that my work is perfect. I will judge it. But, now my memory of it is so faint, as though it were a painting of my childhood. I’ll refresh my memory, only briefly and that will be all it takes to make up my mind.”

The man turned his back to the rain and hunched further. He swept his coat up over his head to protect his cargo from the downpour and undid the two brass clasps that held the case shut. He eased it open, as a surgeon eases open the chest, so very slowly with much care taken to exclude the rain. He eased it open until the sliver crack was just wide enough to see its contents clearly. “That settles it then” he said aloud, and he shut it very quickly and redid the clasps. “The rain must have seeped in through the seam and ruined it. I have no more business here.” With that, the man walked home, and the rain fell ever heavier.